This article first appeared on BizNewOrleans.com on November 16, 2018. 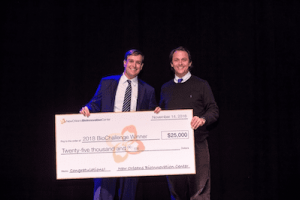 NEW ORLEANS – Wearing a suit instead of his usual green scrubs, Doctor Grayson Gremillion stood behind a podium and introduced himself to his audience inside the Joy Theatre: He’s an ear nose and throat physician, the CEO of Gremillion Technologies, and the creator of the SimplyBreathe nasal implant.

He was one of four entrepreneurs pitching for cash and investment prizes during this past Wednesday’s BioChallenge event.

Jumping into his presentation, the native New Orleanian posed a question.

“How many people out there suffer with allergies and nasal congestion,” he asked, prompting several people to raise their hands. “You know as well as I do, that it’s a pain to suffer with them and treat them correctly. You have probably gone to the pharmacy and tried every antihistamine decongestant, Afrin, nasal steroids, and even some weird things. Once you have gone through the aisle a few times, you see the doctor.”

Gremillion then revealed that more than 60 million Americans suffer from allergic rhinitis and nasal congestion, before adding that his company, Gremillion Technologies, can decrease patients’ daily treatment burden and boost their quality of life with SimplyBreathe – a small intranasal implant designed to slowly release medicine over four months, to keep the symptoms of allergic rhinitis at bay.

He came up with his invention during his medical residency, when he frequently met patients suffering from allergies, nose bleeds, or a resistance to treatment – especially if the medication wasn’t taken properly.

“This is like going from an oral contraceptive to a contraceptive implant. It will revolutionize the way patients are treated for allergies and nasal congestion,” Gremillion said of SimplyBreathe. After detailing the benefit for patients and his market strategy, Gremillion answered questions from a panel of judges.

The following three pitches were from OncoThera, which has developed a new treatment for Glioblastoma that can provide significantly better outcomes for patients who suffer from the deadly disease; Prep Tech, LLC – a medical device product line that will facilitate a new process for preoperative skin preparation outside the operating room; and Levisonics, which created a point-of-care blood coagulation-testing machine using a non-contact technology platform, referred to as Acoustic Tweezing Thomboelastometry (ATT).

Gremillion won the top two prizes, for a total of $50,000, but he was quick to praise his competitors.

“They’re all great and I wish them the best, because it could’ve been them winning just as well as me,” he said.

The three-day event, hosted by the New Orleans BioInnovation Center, brought together innovators, entrepreneurs, investors, and technology scouts from within the life science, green energy and STEM communities.

It included educational sessions covering various topics related to biotechnology startups, including a panel discussion with experts who have identified opportunities and created solutions for the opioid crisis.

Investors learned about the life science industry, and attorneys earned continuing legal education credits, with topics including how to ethically represent clients in the cannabis industry. During the Tech Showcase, universities presented new inventions.

Innovation Louisiana was launched in 2013.

“When the BioInnovation Center was created back in 2002, the belief was that we would put together this business incubator and have companies that are starting up and moving in, but there was no real knowledge about starting companies and having them move to the South,” explained Aaron Miscenich, the president of the New Orleans BioInnovation Center, Inc. “We started looking for ways to bring expertise to the research community, and we came up with Innovation Louisiana.”

The conference offers professionals a chance to network with one another and share strategies for launching a company – from learning about licensing to writing a business proposal.

“They need to understand the challenges of starting a company, but it’s the relationships that are worth it – whether they’re between local parties or with folks from other countries,” said Miscenich. “The folks that are coming in are pretty generous with their time. They really are excited to be part of what’s happening here.”

We will do our best to accommodate your busy schedule. Request an appointment today!

Leave us a review

TAKE A MOMENT TO REVIEW US ONLINE. YOUR REVIEWS HELP OTHERS LEARN ABOUT OUR BUSINESS. WE TRULY APPRECIATE THEM!

Accessibility by WAH
Call Us Text Us